Posted on December 12, 2019 Posted By: Church Office No comments yet 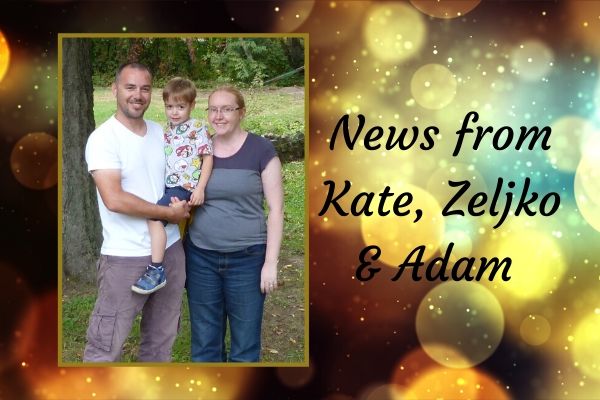 One of the saddest moments this year came in October when we cancelled out Sunnyside trip. Adam had picked up a particularly nasty tummy bug that had the doctor sending us to A&E. Thankfully he wasn’t admitted but was too weak to be bumped about for the long journey and yet another strange bed. We so missed seeing your faces and hope that 2020 will give us another opportunity to once again worship alongside you. Adam recovered enough to fly him home as scheduled and soon regained his lost weight.

Back in Novi Sad we continue to build up JesusWithoutLanguage.net – my kids’ ministry resources website. This year we’ve averaged around 3 thousand people a week though I’m about to enter my annual December slump. I was quite chuffed to pass the 100,000 pdf downloads mark this year. The site is getting old now, it celebrates its 8th birthday this weekend. I’ve released a few lesson sets and sold a handful but not many. One lovely lady bought a set priced at £7+ and chose to pay £50 for it as a Christmas gift to us. The kindness of strangers always astounds me. I’m hoping to make more packs up and we also want to adapt the donations buttons so they accept different currencies as it’s all been in UK pounds so far. I’m not expecting a flood of giving but a drip that exceeds 0.001% of readers would be great.

I may have written before about belonging to an online community of Christian women, serving in mission overseas called Velvet Ashes. I got involved with them by joining their bi annual connection groups and after a few, my name was put forward to facilitate – they don’t use the word ‘lead’! Recently I joined their Facebook team so I’ve got to ‘picture on the website’ status. Check out the great short video at https://velvetashes.com/about/ if you’ve never heard of them. For the last two years, I’ve led connection groups specifically aimed at women who are married to nationals. From these has spun an experimental collective year-round group which keeps growing. Presently the core Velvet Ashes team is debating if and how to open this group up. I’m loving pouring my energy into this group it’s a privilege to walk alongside these women who are part missionary, part immigrant, part foreign bride and the unique challenges that mix brings.

Beyond obvious mission…
As a family we’ve had an odd year for things crumbling or failing us. It felt like everything major went, though I know that can’t possibly be true. The latest ‘crumbling’ was a ceiling in my mother in law, Vera’s house. Having moved a unit to inspect it, we realized that some floorboards had rotted through too. Thankfully we’ve found some reliable builders to get the house sorted this week (pour a proper concrete floor etc) and hope everything will be back in place before Christmas preparations begin.

Zeljko continues his web work which is going fine, the work drips in at times rather than flows as a steady stream but since we moved into the new office space this summer (the old office space is now Adam’s bedroom) there has been a clear lift, sadly almost always coinciding with something failing… sure God laughs at our plans! Adam (now 5…where did that time go?) is still loving his nursery/kindergarten and has a year before pre-school officially begins. He’s still struggling with the Serbian language, not particularly helped by the new American kids in his group, but he’s very into maths and learning to read in English so we are confident he’ll be fine in the long run.

This year is the first I’ll be in Serbia for the whole of the Christmas period so I’d love your prayers as you celebrate the holidays. With oodles of thanks for your continued support and prayers and of course…